Managing conflict and asserting yourself

Conflict is normal. All of us have at times had interactions with other people which have not gone as well as we would have liked.
At one level we may simply feel misunderstood and be able to “shrug it off “without much difficulty.
However, sometimes we can feel personally attacked and our first reaction may be to “lash out” in anger or fear. In these later circumstances the strong feelings we experience may make it difficult to really hear what someone is trying to say to us. In extreme situations, such confrontation can feel threatening to our overall wellbeing and functioning.
It is possible to look at our personal interactions in a different way so that we can turn conflict into an opportunity to achieve clearer communication and bring about change. There are two common reasons why people get into conflict:

In the heat of the moment it is easy to forget some common 'rules of thumb' which aid successful communication. Good communication is a 3-step process

Respect the other person's needs as well as your own. You have valid concerns which need addressing, but so does the person with whom you are in conflict (Even if these are not immediately apparent).
Tackle the problem directly and respectfully with the other person. It is much better to work directly with the other person in the conflict- going via others makes an escalation of the conflict or further misunderstandings much more likely. Avoid involving peers in 'taking sides' and, as far as possible keep the conflict out of the public eye. Whilst it can be useful to check others' perceptions of the situation or seek others' views of your actions or desires, if you are merely seeking confirmation for your own views this is only likely to lead to a more entrenched position.
Separate the problem from the person. Pointing out the distinction between the problem and the person and confirming you wish to treat the other person respectfully may help them do the same. Your issues are more likely to be resolved if you avoid making personal attacks which embarrass or ridicule the other person.
Speak without interrupting each other. You may set up further misunderstanding if you do not give the other person the opportunity to finish what they have to say. You also need to ensure that there is agreement about everything said so far, before going on to the next point at issue.
Negotiate in good faith - dirty deals do not last! Look for mutually satisfying agreements - one-sided offers tend not to work. Though it is common to think there must be a winner and a loser in a conflict, this is not necessarily true. Participating in negotiations where the goal is a 'win-win' solution (e.g. Both parties attaining satisfaction on their needs and interests) is both possible and helpful.
'Interests' vs. 'Positions' - Often in our negotiations with others, we think taking a 'hard position' or exaggerating our 'bottom line' will get us a better result. Actually, such positional bargaining frequently backfires because the other person is likely to get upset, feel unfairly treated or just decide to dig their heels in on their position.
A better approach is to think about the interests underlying our initial position on an issue. An underlying interest is usually related to a principle we hold, a moral value, a hope or expectation, or some less tangible need. If the position is what the conflict is about, the interest is the reason why we want a certain response.

These suggested steps incorporate the guidelines above and can help resolve conflicts:

What type of  communicator are you ?

If you feel wary of assertiveness, you may be confusing it with aggression. Aggression is a defensive reaction where we try to overcome feelings of insecurity by puffing ourselves up and expressing our feelings, needs and ideas at the expense of others. The benefit is a temporary sense of power or control, but the downside is that aggressive behaviour distances us from other people and we can end up feeling isolated and bitter.

The flip side of aggression is passive communication. Like aggressive communication it stems from similar feelings of insecurity and low self esteem, but when we behave passively we put ourselves down, rather than the other. We avoid expressing our feelings and needs, we ignore our own rights and allow others to infringe on our rights, perhaps by choosing for us. Passive behaviour is unclear and indirect; it may involve lying or making excuses. The benefit is that we avoid conflict, but at great cost, because we don't usually get what we want and we can end up feeling even worse about ourselves.

Frequently, passivity and aggression combine and we find ourselves behaving in a passive aggressive or manipulative way. This is most likely to happen when we strongly need or want something, but feel particularly helpless about getting it. We can then behave in ways that are indirectly aggressive, controlling or unclear, which deny our feelings and those of others. We may use our feelings of victimhood or martyrdom to make the other person feel guilty. The benefit is that we avoid rejection and hurt and it can appear as though we care for the other person. The downside is that we are left feeling emotionally low and secretly resented by others who see through the facade of fake care.

Fight (Aggression) and flight (Passivity) are instinctual responses when encountering a problem. Assertiveness is an alternative response more suited to the solving of the kind of relationship problems that we find ourselves in, in modern community living. It involves the use of more sophisticated brain and verbal skills such as listening, empathy, discussion and negotiation. Assertive behaviour is honest, direct, clear, expressive, self-enhancing, persistent and respectful. The benefit is that we get what we want at least some of the time and when we don't we still feel good about ourselves because we have expressed ourselves clearly and honestly. Assertiveness builds confidence, self esteem and self respect. But of course we may meet conflict or confrontation, so need to develop new ways of dealing with these.
A useful step to consider is -where you are in relation to these four types of communication and how that has come to be? Of the four types of communication listed, which is most characteristic of you? Are you happy with this? If not, what changes would you like to make?
Remember that non-assertive behaviour:

If you would like to be more assertive, here are some practical suggestions to help you make changes.
Express feelings 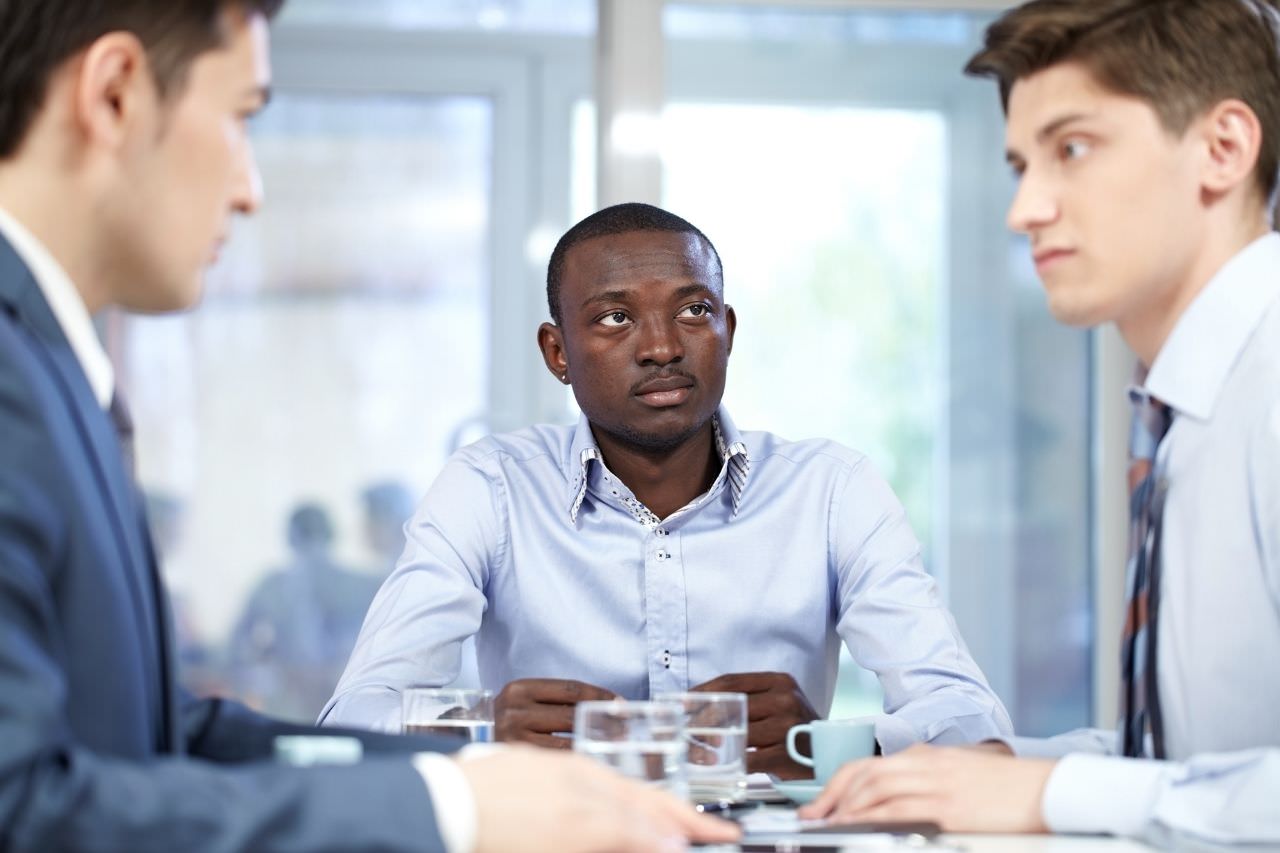 May 10, 2016 | Posted by Impact Teachers
Do you find accepting constructive criticism difficult or are you one of those people who can...
END_OF_DOCUMENT_TOKEN_TO_BE_REPLACED 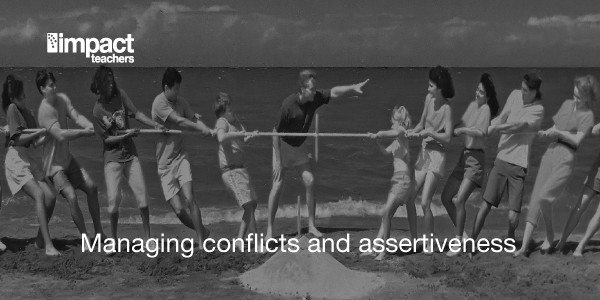 Feb 23, 2016 | Posted by Impact Teachers
Conflict is normal. All of us have at times had interactions with other people which have not gone...
END_OF_DOCUMENT_TOKEN_TO_BE_REPLACED 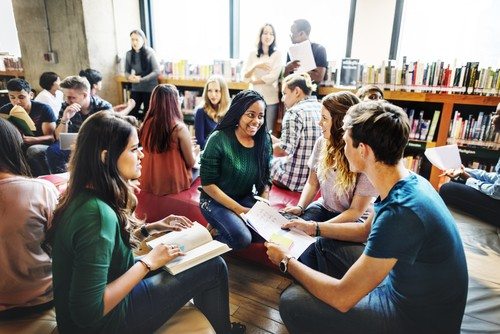 Mar 7, 2017 | Posted by Impact Teachers
Teaching in the UK doesn’t just end with maths, science and all the other subjects on the...
END_OF_DOCUMENT_TOKEN_TO_BE_REPLACED